Pulmonary Tuberculosis in Children with HIV Infection: From Symptoms to Diagnosis and Treatment in a Pediatric Center in YaoundÃÂ©-Cameroon

1Faculty of Medicine and Biomedical Sciences University of Yaounde I, Cameroon

3Mother and Child Centre of the Chantal Biya Foundation, Cameroon

Introduction: Not only is tuberculosis common in sub-Saharan Africa, but also diagnostic barriers contributed to the delay of treatment in children. We described the diagnostic possibilities of tuberculosis in the context of HIV with limited resources.
Materials and Methods: A retrospective study was performed with the records of children co-infected with HIV-TB benefited from TB treatment in a pediatric center in Yaoundé. The time between the onset of symptoms, diagnosis and early treatment was assessed.
Results: A total of 18 files comprising all the clinical information were retained. Malnutrition (94.4%), chronic cough (88.9%) and prolonged fever (44.4%) dominated the clinical picture. Between the onset of symptoms and the evocation of tuberculosis, we recorded at least two months in more than two thirds of patients. Only 11 (61.1%) had received bacteriological research from their gastric secretions or sputum of whom 3 (27.3%) showed the presence of bacilli. The diagnosis of the other 15 was made based on clinical assessment and in the absence of response to appropriate antibiotic therapy.
Conclusion: The initiation of antituberculous drugs to children co-infected with HIV was late. The delays in seeking care and financial barriers to paraclinical investigations have contributed. Strengthening the knowledge of health personnel would improve time-on treatment of tuberculosis whose diagnosis was done mostly without bacteriological evidence. The subvention of complementary tests would be a considerable contribution to our context.

Tuberculosis (TB) worsens morbidity in children with HIV infection. The situation is a problem in Cameroon, where HIV prevalence among TB adults is about 30%, and children account for 8.5% of people living with HIV [1,2]. The dual TB-HIV co-infection complicates the diagnosis of TB, it also provoke the delay of treatment [3,4]. The association of clinical and radiological signs, with a lack of response to antibiotic therapy would be optimal for the paraclinical workup when microscopy is negative [5]. In the absence of HIV, an approach based on the symptoms is enough to evoke tuberculosis [6,7]. In this context, when it is possible to do a chest x-ray, the diagnosis becomes easy [8]. WHO recommends that any child with signs of pneumonia, who do not improve with antibiotics, should be investigated for tuberculosis [9]. Conversely, WHO does not recommend any treatment for TB test diagnosis [9].

The identification of the tubercle bacillus in infected children remains a challenge in our work settings [10]. Several bioassays can effectively diagnose tuberculosis, whether the patient is co-infected or not [5]. The most successful are expensive and thus inaccessible to all laboratories. Standard tests are used in our environment, although they are often partially realized. The culture of sputum or gastric fluid then would be the best investigation of pulmonary tuberculosis [11,12]. Before the advent of molecular diagnostic PCR, Ziehl Nielsen was the most efficient test. The aim of this study was to describe the diagnostic process, which will lead to the initiation of anti tuberculosis treatment in children co-infected with HIV.

A retrospective study examined the clinical records of a cohort of children infected with HIV and treated for pulmonary tuberculosis from January 2008 to December 2009 at the Mother and Child Centre of the Chantal Biya Foundation in Yaoundé. The anamnestic criteria, clinical and laboratory data which justified the prescription of anti-tuberculosis treatment were analyzed. We classified the patients with regards to high probability of tuberculosis according to the score of Crofton using these data [13]. For each patient, the time between the first symptoms, consultation and evocation the diagnosis of tuberculosis, HIV and initiation of TB and ARV was calculated. Anthropometric indices Weight/Height, Weight/Age and Height/Age defining global acute malnutrition, underweight and overall global chronic malnutrition were estimated according to WHO standards for children aged under 5 years [14]. In those older, nutritional status was calculated using the body mass index for age when the child had no edema [15]. Different indices were interpreted using the WHO-Anthro software Version 3.2.2. A child had a moderate malnutrition when the index value was between -3 and -2 Z-score compared to the median of the reference population. It was termed severe when it was less than -3 Z-score and beyond -2 Z-score, nutritional status was said to be normal. Research of TB was done either in the gastric fluid in the young or in sputum when the children were at least 10 years. HIV diagnosis was done either by PCR in children under 18 months or by a serological test beyond this period.

Our study was approved by the Ethics Committee of the Faculty of Medicine and Biomedical Sciences of the University of Yaoundé I.

A descriptive analysis was performed with regard to categorical variables including sociodemographic parameters, clinical and laboratory data as well as the time-limits between different stages of management of subjects. These were expressed in frequencies or percentages. For continuous variables, the median or average were used with 95% confidence intervals. The values of the probability P <0.05 were statistically significant.

A total of 18 children who received TB treatment were included in the study. Both sexes were equally represented. The ages ranged from 5 months to 13 years, with a median of 6.2 years [IQR: 5.3 years]. The range of 5 to 9 years accounted for half of the subjects; there was no significant difference between age groups and gender (p = 0.324). Almost all patients had chronic cough and the majority (88.9%) had been treated with different classes of antibiotics including ampicillin and gentamicin, or ceftiaxonegentamicin or cloxacillin, gentamicin and the macrolides and related drugs. Some had also received third-line antibiotics including quinolones, Amikacine, Imipenems. Only two subjects were already taking ARVs treatment. Table 1: Socio-demographic characteristics and time elapse between the various stages of patient management before treatment of tuberculosis. Table 2: Distribution of patients according to the signs/symptoms of TB and rating score of Crofton and Miller.

Table 3: Distribution of patients according to the tuberculin test and search for tubercle bacillus. 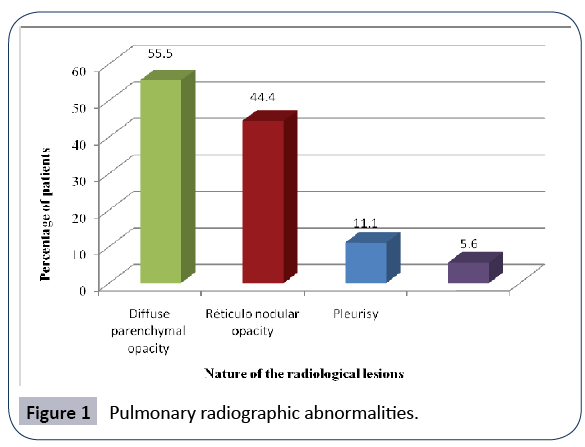 The diagnosis of tuberculosis is difficult in the context of resource scarcity; HIV infection further complicates the situation. Despite the small sample size, this study had as aim to report the bottlenecks faced by the management of co-infection of HIV and TB. The therapeutic pathway before the diagnosis of tuberculosis in children with HIV and TB as well as criteria for anti-tuberculosis treatment was analyzed. Results show that the delay in the diagnosis of tuberculosis was a problem in the study. Between the first symptoms and diagnosis of certainty or presumption which justified the initiation of anti-TB treatment, it took more than two months in most subjects. Several reasons explain this situation first, 1) late resort for healthcare system. In Abidjan the time between the first symptoms and hospitalization was shorter, standing at 12 days [16]. Some authors have demonstrated the long delay in diagnosis and attributed it to the parents [17]. Sensitization of communities for the recognition of symptoms, perception of the curability of the disease and the use of health services was crucial [18]. The problem also fall 2) on health personnel [19]. The time between the admission in hospital and the evocation of the TB diagnosis was long in our site. Some staff would be poorly trained or they were focused on HIV instead of TB being investigated. In a rural area the inability of staff to diagnose partly explained the poor management of patients [20]. However, our population was mainly from an urban area (Table 1). The staff working in urban areas would also be less efficient. It would be a real problem of training of all health care givers on screening for tuberculosis. Indeed, chronic cough (Table 2) was often present (100%), and a weight loss (94.4%) associated in each case with a radio pulmonary disease (Figure 1). The radiological lesions were predominantly parenchymal opacities (52.9%); also described in other studies [21]. Elsewhere, miliary and caverns were frequent in co-infected children [22]. These radiological signs would be more accurate than the symptoms and their association would increase diagnostic sensitivity [23]. Even in the context of HIV infection, all children should have received an IDR, a research for TB and the search for index cases. On another hand, we noticed 3) insufficient use of diagnostic facilities, in particular, the IDR and the search for TB, probably due to the high cost. In our site, simple tests such as IDR are not feasible at the bedside. Our results show that it was available in 44.4% of cases. In this site, patients should be taken to the Centre Pasteur laboratory of Cameroon close to our site in order to benefit at a price of US $ 5. An exit permit is required for hospitalized subjects. Some parents would otherwise be unable to financially support these tests. Furthermore, the provision of care is done through out of pocket payments for families. Like many Cameroonians, most would live below the poverty line [24]. Thus the TB test was done in less than one third of subjects. To achieve a minimum of examinations, including X-ray, IDR and sputum test, parents must pay about US $ 42. If we add the hospitalization costs, it will take more than $ 66 US. In other contexts, only the radiological exams have increased the cost compared to routine investigations [25]. There would also exist 4) technical problems in the collection of specimen in young children. Also, parents would face difficulty retrieving results such as the culture of TB which is slow to arrive. However, the diagnosis of tuberculosis is based on anamnestic, clinical and paraclinical arguments [5-8]. On these elements are based rating systems which, although unreliable for therapeutic decision, are only an aid to screening [9,26]. One of the diagnostic criteria is the contact of the subject with a TB excretory adult [27,28]. It was not mentioned in most files that were reviewed. This notion was found in over 60% of patients in several studies [16,29,30]. Long-term fever existed only in 44.4% of patients. Some authors have excluded it from the definition criteria of tuberculosis in the community [31]. Severe weight loss was common among TB patients [32]. The analysis of anthropometric indices showed that whatever the type of malnutrition, they were not always altered in our study (Table 2). It is known that severe deterioration of weight should lead to investigation of HIV infection as well as co-infection with tuberculosis [33]. As in our study, the authors described a normal nutritional status in about 1/4 of subjects [22]. The Weight/Age is one of the scoring elements for tuberculosis [34]. Although not recommended for TB diagnosis in a context of HIV, the use of system would nevertheless allow anticipation on investigations in order to shorten diagnostic time [9,35].

Ultimately, conventional methods of TB diagnosis are particularly insensitive to the direct examination of secretions. It is even more difficult in children because of the difficulty in obtaining sputum, and because they are less often bacillus excretory than adults. In HIV-TB co-infected children, diagnosis is even more complex because IDR is often negative, clinical signs are similar between these two diseases, which creates confusion and makes the system of scoring such as Crofton less specific.

We conclude that the delay of diagnosis of TB was long in our study and was due to several causes. Sensitization of parents on the signs, as well as retraining of staff would decrease the time of treatment initiation. New more sophisticated molecular biology techniques such as, PCR exist and would identify more effectively TB [36-38]. However, their extension would require a government subsidy because of their high cost. Free IDR, pulmonary X-ray and Research for TB especially in children infected with HIV is a measure that can reduce the diagnosis time. We suggest that a study carried out on a larger sample may provide more information that would be used to develop management algorithms of HIV-tuberculosis co-infection in our context. Nevertheless, the combination of chronic cough + weight loss + pathologic pulmonary Xray +/- long-term fever should be enough to make an IDR and research on TB, if children were referred earlier and the examinations prescribed systematically.

The authors thank the staff of the approved HIV treatment center of mother and child-CBF for their collaboration. They also thank Frédéric Tchouine for the statistical analyses.